Due to its geographical position and variety of ecosystems, the Iberian Peninsula is a place of interest for the birds. In the wintering season, Spain and Portugal receive a large number of Curlew that rest and feed mainly in the humid areas of the north and west coasts. However, the situation during the breeding season has changed drastically, and the population of curlews that breed in these lands has reduced.

Breeding records exist throughout the 20th century in Galicia and Asturias. Even in the 50s there was an important breeding area in A Limia, Ourense, which ended up disappearing because of the drying of Lake Antela. This drastic decrease in individuals led this population to the category of “In Danger of Extinction” in the Spanish Catalogue of Endangered Species (Royal Decree 139/2011, of February 4th). 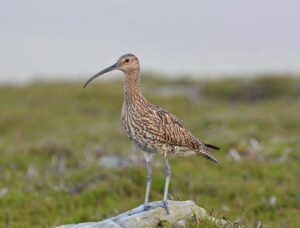 Currently, Curlews only breed in Galicia, in the region of Terra Chá, which is located within the Biosphere Reserve “Terras do Miño”, declared in November 2002, where between 3 and 5 pairs breed annually. The current nesting zone is an area of moorland and scrub, close to 300 hectares, where the low-lying scrub (<30 cm) predominates (Domínguez & Vidal 2013). In Galicia the presence of nests extends from the end of March to the middle of June, with some cases of egg replenishment in pairs that lost the initial clutch and, in one case, of two replenishment egg-laying (Domínguez & Vidal 2013).

The survival of this small population depends on the maintenance of the vegetation of the area where they breed, being its main threat the destruction and alteration of their habitat for nesting and feeding. 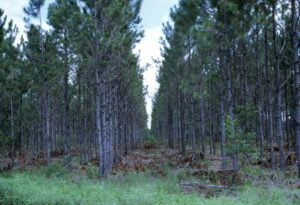 In recent years, the plantations of pine and eucalyptus have increased around the nesting area. At the same time, the transformation of the surrounding pastures into maize crops poses a major threat to young Curlews. Another threat of transformation, posed in recent years on the existing breeding area in Castro de Rei, has been the one related to the installation of a center for the scrapping of old aircraft parts, but for now this remains unconfirmed.

Also, during the breeding season, aircraft flights, mainly light aircraft, take place at the Rozas aerodrome, adjacent to the current breeding area, which may also lead the breeding pairs to ambandon the area.

To all this must be added the presence of predators, especially foxes and ravens, which play a very important role in the mortality of curlew chicks.

This critical situation of the Curlew population in Galicia requires urgent action to recover this species, as well as the implementation of urgent habitat management measures. The Curlew population in the world is endangered, the situation in the Iberian Peninsula must not be repeated in other breeding areas, which is why the work of organisations like Curlew Action is essential to help this and other species in the same situation.