Please be gentle, this is my first “Blog” and  I am completely out of my comfort zone!!!!

My relationship with Curlews began early, through my dad.

My dad, by his own admission was not the most academic of men, but he had taught me to skin a rabbit, catch and clean a trout by the time I was 10 – all for the table.

We went sea fishing around Morecambe Bay and it was on these trips that his beloved Curlew appeared. It was his favourite bird and he’d often scream “ Curlew!!” , taking everyone by surprise. This later became our family greeting to each other!

His love of nature  and the outdoors stayed with me and I used many of my experiences throughout my teaching career.

I have infinite faith in the abilities of children both as learners, but also as teachers and influencers in Environmental Education and Policy Making. This is not the preserve of older students, children at Primary level will always think ‘outside the box’ in terms of problem solving and environmental work… given the opportunity.

In the 1990’s I led my school in a Greenpeace Project, “ No Time to Waste”, in which my  10-11 year old children looked at water pollution in a local water course. They sampled the water at various points to the Irish Sea, interviewing key stakeholders along the way. The project culminated in the kids interviewing Margaret Thatcher at 10 Downing Street, just prior to her departure ( many of the kids claimed credit for this in later life!!!) The project involved 9 Countries and we were lucky enough to meet with kids from these countries at Curriculum Conferences in Moscow and Seattle. I miss the kids but swore I would never go back into schools…… under any circumstances.

I retired from teaching to a beautiful tidal causeway in Morecambe, where I can observe the magnificent bird life on the shoreline – including my beloved Curlew. We are one of the few places in UK to have a reasonable population….. at the moment. 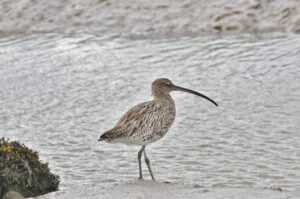 Curlew on the Shoreline Outside (picture credit  Alan Smith)

Local data to hand is encouraging inasmuch as a survey of 32 Bowland farms in 2019  found 140 pairs, which is an increase on 2018, hopefully most of these birds will have gone on to breed and rear chicks.

Except for January 2019 all the local WeBS (Wetland Bird Surveys) counts were up on the five year average, the Lune estuary held the largest known breeding population throughout.

This is where our monthly WeBS count data plays a very important role in monitoring the situation UK wide as well as local, so overall not all bad news, but much still to do for this declining species.

I’m currently being mentored by Alan Smith in the art of WeBS counting, who also updated me on the current population above. We had our first, ‘joint’ count last week and it was fascinating. I particularly enjoyed the fact that as the tide rises and feeding grounds are covered, the birds all hang out amongst the reeds on the other side of the Estuary!

In terms of my own Curlew  adventure, I’ve always messed about with wire,  with a little training in  silver-smithing and jewellery etc, but spurred on by the birdlife outside, I began making wire sculptures. To my complete amazement, people actually liked them and wanted to buy them! It was at this point that I discovered the Red List and the fact that this beautiful bird was endangered. I’d read a little about Mary and admired her determination to raise awareness of the Curlew’s plight and thus I stumbled upon Curlew Action. I decided to donate a % of revenue from any sales of Curlews I sold in my Etsy shop to the Charity. It also served to raise awareness of the work they’re doing. 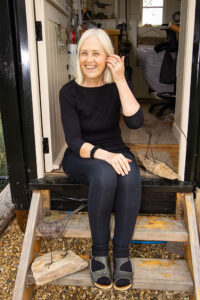 My next milestone was winning 3rd place in the Curlew Action Art Competition!!!!!  Oh yes!

It was around this time that I noticed a post from @Jackie Entwistle, a teacher from Lancashire.

The next phase of my Curlew love affair, I blame Jackie for.

Having said I would never go back into school, there was something fabulous about Jackie’s post. I don’t know if it was the Curlew wall display or the video footage of her kids trying to record the call of the Curlew. Whatever it was, the cogs began to whirr and I contacted Ellen and Mary about the possibility of setting up an Educational Project to involve schools nationally ( and hopefully internationally) in learning about ( and teaching others about!) the Curlew. Local Groups, such as the Lancaster Bird Watching Society  and others nationwide have SO much expertise to share with schools and children. Moreover, Curlew Action is comprised of a HUGE amount of talent and a great knowledge base – all sorts of folk who don’t necessarily work in schools! The project is in its early stages, but really exciting,  I know Ellen will tell you more about it on the Newsletter!

Finally, I was informed this week that 2 of my pieces (one is a Curlew obviously) have made it through to a prestigious exhibition at the Mall Galleries in London. The Royal Society of Marine Artists Exhibition is at the end of September and I’m SO chuffed ,as we say in the North!!! Obviously if my exhibit sells, there’ll be my donation to Curlew Action. 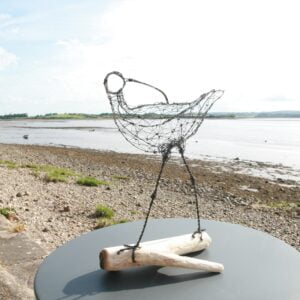 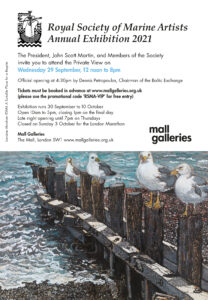 So there we are – my Curlew experience continues.  Constantly asking the daft questions folk want to ask but daren’t – constantly learning.

Dad, wherever you are and Jackie ( I know where YOU are!)