The Future for Curlews

Four years ago, the Eurasian Curlew (Numenius arquata) was deemed near threatened on the IUCN Red List (2017), and even then, populations were seen to be decreasing. It is hard to know the current status of Curlews due to a lack of recent data, but the WWT (2021) state that Britain has lost 65% of our Curlews since 1970 through a number of pressures, resulting in the future of this species being uncertain. 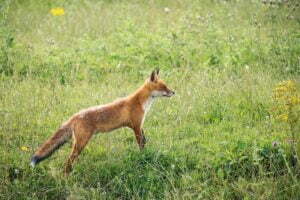 Colwell et al. (2020) informs that chick and egg predation is a major driver of Curlew population decline, with foxes(Vulpes vulpes), badgers (Meles meles) and carrion crows (Corvus corone) being their most frequent predators. To put this into perspective, of 30 nests monitored by Curlew Country in 2015-2016, only 3 chicks hatched and none of them survived to fledging. Whilst active predator control is carried out, some people consider it controversial, expensive, unsustainable, and impractical, leading to some fieldworkers being intimidated by public criticism regarding predator control (Colwell et al. 2020). Further issues include gamekeepers undertaking most of their predator control in the summer alongside the release of common pheasants (Phasianus colchicus), long after Curlew breeding season ends, and the large numbers of game birds released into the countryside might be sustaining high numbers of generalist predators.  In positive news, alternative methods have seen to be successful in more passive predator control. In Germany, temporary electric fences have been trialled with the aim to protect nests from terrestrial predators, such as badgers and foxes, leading to a 79% hatching success for fenced nests compared to 18% for unfenced nests (Meyer and Jeronin, 2017).

Alongside management changes, climate change poses a significant threat to Curlew survival. As global temperatures increase and sea levels rise due to melting ice caps, and the British climate becomes stormier and wetter, lowland breeding sites are at risk of permanent or reoccurring flooding, even in the spring and summer months. As Curlews are a ground-nesting bird, this endangers the survival of eggs or chicks who are not yet able to escape incoming floodwater. In personal experience, I have seen my local SSSI (Upton-Upon-Severn Ham) become submerged in water even during spring, where Curlews are known to feed and nest. These environmental changes also force adults to relocate to more suitable breeding sites, which may explain why only one pair of Curlew has been recorded on Upton Ham SSSI in 2021 compared to 5/6 individuals in recent previous years. 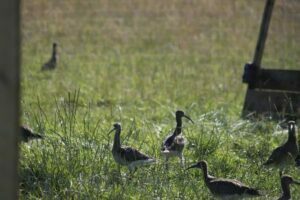 It can be seen that there are multiple threats to the future of Curlew populations, and from multiple aspects it can be seen as un-solvable. However, positives can arise from the information that has been gathered, seen in alternative tactics used to enhance their survival, such as fencing off nests from predators or alternative farming management. Alongside this, Camlad Valley Community Wildlife Group (2020) inform that Curlew Country formulated a curlew recovery project where head-starting saw 61 fledglings released between 2017-2019. Head-starting is a conservation tactic in which eggs are retrieved from wild breeding sites where chances of survival are low (such as military airfields), raised in captivity until fledglings, and are finally released when chances of survival are higher. However, this is only considered as a temporary strategy to boost population numbers until more appropriate conservation tactics are established. Despite all this, educational awareness is paramount as we enter the future, as we as humans must take accountability to preserve this species, whether that is through our farming and grassland management, our recreational disturbance, or our contributions towards climate change. The future of this species can only be promised if our species pave the way for them.