Healthy peatlands are few and far between in Northern Ireland. But despite restoration offering a huge range of carbon, biodiversity, flood prevention and water quality benefits, restoration rates have been painfully slow without proper government funding being allocated [author’s image].

As anyone who cares about curlews will know, their breeding populations are declining rapidly in the UK and Ireland. Many curlew breeding sites occur on peatlands, which are made up of naturally accumulated dead organic matter and form the soils of blanket bogs, lowland raised bogs and fens. These are incredible habitats, not just for breeding waders such as curlews, golden plovers and dunlins, but also for unique invertebrates and plantlife. Plus, healthy peatlands store vast quantities of carbon, ensure good quality drinking water and reduce flooding downstream. But peatlands have often been the targets of environmentally damaging land use changes that have threatened the health of these habitats for humans and a range of biodiversity including curlews.

Peatlands face a range of threats. One of them is being selected as sites for conifer plantations – the darker side of tree-planting. Although the main drive for planting peatlands up with non-native conifers on a large scale mainly ended in the 1990s, the restocking of these environmentally devastating plantations continues. By planting these conifers on peatlands, these naturally wet soils must be extensively dried, causing deep cracking and erosion and releasing huge quantities of carbon into the atmosphere, which is only in part offset by the carbon stored by the trees themselves. This completely transforms the formerly healthy and rich peatland into a dry and damaged spruce and pine-filled desert, with the plantations supporting very little wildlife and producing much poorer quality timber than trees grown on mineral soils. The planted peatlands are completely unsuitable for breeding curlews, but research has shown that even the remaining adjacent peatlands will have low breeding success for waders. 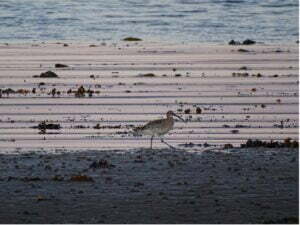 A curlew on Belfast Lough. As a breeding bird in Northern Ireland, they are restricted to a fraction of the sites they once used for successfully rearing chicks [author’s image].

This is known as the ‘edge effect’. It occurs when generalist predators such as foxes and hooded crows predate breeding waders up to 700m away, even when the tree cover is as little as 10%. It has been found to impact golden plovers, dunlins, lapwings and, of course, curlews. All four of these waders are in sharp decline as breeding species in Northern Ireland. This shows that conifer plantations on peat have much wider and more severe impacts on breeding waders than is initially obvious. In Northern Ireland, conifer plantations are one of the main threats facing peatlands, in addition to other forms of drainage, overgrazing, burning and turf-cutting. In fact, 86% of our peatlands are considered damaged.

What can be done to reverse the damage caused to peatlands by plantations and other land uses? And how will this help to save the curlew? Restoration through blocking drains and ‘rewetting’ the peat soils can recover bog hydrology and transform these damaged sites back into nature-rich habitats. In ten years, or perhaps less using more modern techniques, the edge effect can be reversed and pressure reduced on breeding waders. But restoration rates are far too slow. In Northern Ireland, only 1% of damaged peatlands have been restored in the last 30 years. But our breeding curlews could be gone in a decade if real action isn’t taken. Unlike the rest of the UK and Ireland, in Northern Ireland our devolved government has failed to allocate funding for peatland restoration. This needs to change urgently if the NI Executive is serious about tackling both the climate and biodiversity crises. And funding peatland restoration will be an absolutely vital piece of the puzzle if we’re going to turn the fortunes of breeding curlews around.