Written by Charlotte Varela. It’s hard to believe that, until relatively recently, I had never even heard of curlews. My love affair began with another love affair, 12 years ago, when I met my partner Matthew. He lived in the countryside and would take us on long nature walks across the fields and into the Lancashire uplands, where I first heard that magical call.

It bubbled up from the grass with such passion and urgency, tinged with melancholy. Then the curlew followed it; all intricate camouflage, elegant neck and drinking straw-bill. Then Matthew started whistling – gently flicking his bottom lip to send his own curlew call up to the bird gliding across the landscape in front of us. And it answered him! This incredible creature answered him, and in that moment, they both had my heart. 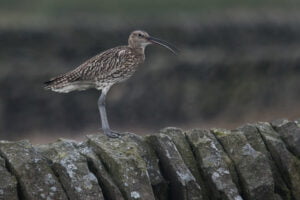 For me, the curlew is a symbol of freedom. Of wildness. Of the windswept moors on my doorstep. It anchors me to the landscape and captures my imagination in a way that nothing else can. Magic is written into its very name, Numenius arquata: ‘Numenius’ meaning ‘new moon’ and ‘arquata’ meaning ‘archery bow’. Maybe it’s that call, which uses both major and minor keys to blend mourning and joy; breaking hearts and mending them all at once. It is almost as if the curlew knows of its place in the modern British countryside – weeping for its future.

Curlews were once a common sight in our lowlands, nesting in agricultural fields that were managed for hay; cut in late summer – after the breeding season – and rich in tasty soil invertebrates. Then after WWII, everything changed. Hay meadows were drained and turned into silage fields laden with fertilisers and cut multiple times a year, including right in the middle of breeding season. Curlew found themselves in a dangerous new world, where their nests were being rolled by machinery or predated by an increase in generalist predators, which thrive in modern landscapes.

Today, you’re most likely to find curlews in the uplands. But even here the picture isn’t completely rosy. They are losing habitat to conifer plantations and chicks to a predator boom. They face what feels like a never-ending list of problems that has led some people to label them as the giant pandas of the bird world. But we can’t write them off as yet another extinction. We can’t just abandon them because they don’t serve a ‘purpose’, because they do.

If you want to get technical, the curlew is an ‘indicator species’ that is so completely intertwined with the wider ecosystem that its own fortunes can alert us when something is going seriously wrong in our environment. And yet, this bird is about more than that. The curlew speaks to our wilder selves, its call igniting something deep within that we may have forgotten was there; sparking wonder and joy. The curlew is also an emblem of all the wildlife we’re losing to systems and policies that urgently need redressing. When a curlew cries, I mourn with it, but that somber call also gives me hope.

Our curlews are still out there, igniting our passion for the natural world and inspiring people to fight for it. They are still clinging on, helped by charities like Curlew Action that are proactively supporting farmers to start making the changes these birds depend on. The future of the curlew hinges on collaboration – for them to survive, we must share our knowledge, share our skills and work together with empathy and understanding. This is not a battle – there are no goodies and baddies – this is an opportunity: to change the status quo, to save a species.