I did a big silly run recently, and it gave me plenty of time to think a lot about Curlews. They’ve recently returned to my neck of the woods to nest and, as usual, their presence has lifted my spirits and reminded me that summer’s not too far away. However, their arrival also reminds me of the internal conflict and some of the questions that Curlews and their conservation make me address. Having time on my run to think through some of these feelings of conflict has helped me think more broadly about the issues facing Curlews.

One particular area of conflict that I feel very keenly aware of is access. Where do we draw the line between being in nature and leaving wildlife undisturbed? My passion for Curlews has only come about as direct result of my passion for outdoor access. I’m an ardent advocate for access rights and feel really strongly about equality of access for all. Despite growing up in Curlew country, it wasn’t until I started spending more time in the UK uplands mountain biking and fell running that I began to really appreciate the wildlife around me. It seems (in my experience) that this is the case for lots of people – until they’ve spent significant time in the uplands, they’re unaware of the wonderful species that live there.

Since the beginning of the pandemic, lots of people are spending much more time out in nature than they ever have 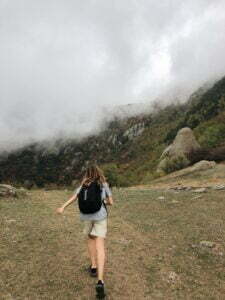 previously. A study by the University of Vermont found that 26% of people visiting nature reserves during early months of the COVID-19 pandemic had rarely – if at all – visited nature in the previous year. People are realising, some for the first time, how beneficial time in nature can be, and beginning to feel more connected with the natural world. The more people feel connected to nature, the more invested they are in looking after it.

But as well as welcoming this new-found national interest in nature; I’m also keenly aware that disturbance is one of the key factors in determining the success of nesting Curlew. An obvious side-effect of increased access is increased disturbance, and therefore could the increased numbers of people accessing the countryside, which I’ve been so pleased to see, be threatening the success of the birds I cherish so much?

Conservation is messy; issues aren’t often as clear cut as we’d like to imagine. Conserving species and habitats is rarely black and white, there often aren’t clear “goodies” and “baddies”. By perpetuating the narrative of conservation heroes and villains we get distracted from the simple, on the ground steps that we can take to have real positive impacts on the species or habitats we’re trying to help.

I’m certainly no expert, and I don’t claim to have the answers, but by sharing some of the thoughts that have been circling in my head, maybe I can prompt other people’s thoughts to swirl and encourage some conversations. We’re not going to tackle the plight of our most beloved species by pointing the finger of blame and alienating people.